Note:  This liturgical note is not a political commentary.  It is a question formed from Jesus’ words in the gospel for Sunday June, 28th.


What is your response to this question?  “Who Really matters?”


Consider your answer.  Don’t worry, no one is going to judge you.  Now consider this follow-up question:  How much time did you take between reading the question and moving on to this paragraph?    The answer to this second question leads to or perhaps proves my point regarding how we receive and respond to information.


We are spoon-fed “facts” by the loudest voice in the room whether they are Google, Wikipedia (or worse yet) The National Enquirer or anonymous message boards.


Don't blame the media.  They have simply responded to our demand to “bottom line me” by turning articles and newscasts into bullet-points and sound-bytes.


It’s even in the language we use:


It’s also in how our responses:

Note:  For those of you who are not online much, this describes what people are doing on their phones all the time. The dash (aptly named) represents the time between each image they are seeing, judging and commenting upon.

Let’s circle back to the gospel.  What really matters?  Part of the answer lies in something I was taught in elementary school:  The answer is not always as important as what is gained from the time and effort taken working it out.  At the end of the day ya gotta show your work.

Basically, it what Jesus said:


….whoever does not take up his cross and follow after me is not worthy of me.
Matt. 10:38

What is the Eucharist? Blog for the Solemnity of Corpus Chriisti 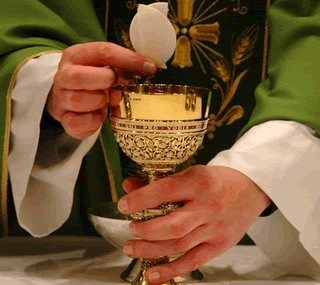 “We can boost our immune systems
by strengthening our social networks and decreasing stress.
Jane Mc Gonigal
The fact that Jane Mc Gonigal is a designer of alternate reality games may lift an eyebrow, but her point remains well taken.   As someone who has struggled with eczema his entire life, I have first-hand knowledge:  Stress attacks the body at its weakest part.
If you find this to be an unconventional way of beginning an article on the Solemnity of the Body and Blood of Christ - welcome first-time reader.  Perhaps glancing again at the picture at the top of the page will help you refocus.  Young hands, neatly but not overly manicured holding a carefully broken host and a glimmering gold chalice.
While the next picture, Christ hanging on the cross formed out of multiple pictures may be less conventional, it is certainly not controversial.  What caption would you use?  I’ve decided to use the words of a Nigerian preacher who chose the Ukraine as where he would spread the gospel message. 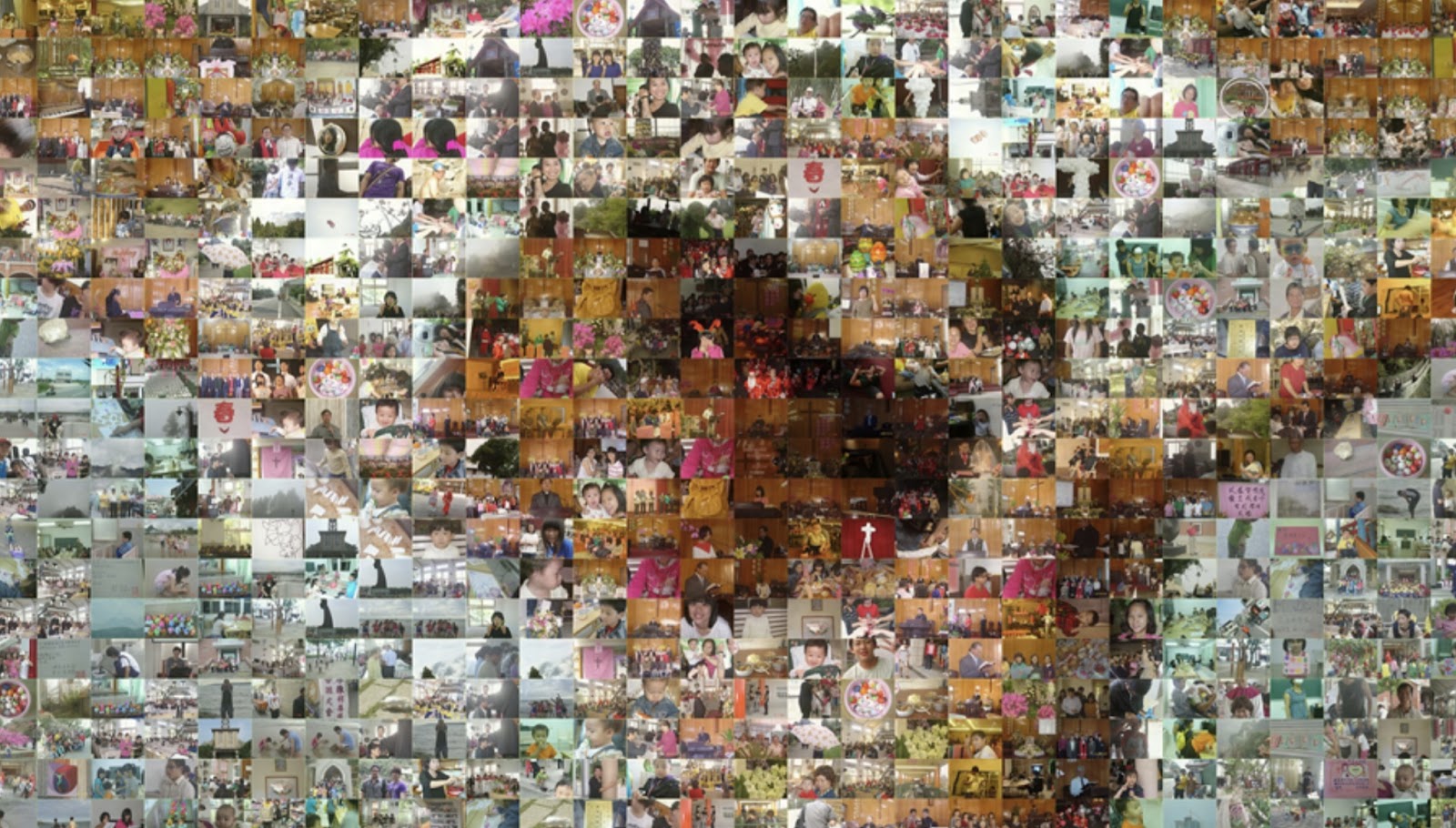 “Every Christian has their place in the body of Christ”
Sunday Adelaja
Consider a more traditional representation. “Calvary” was painted by Maerten van Heemskerck, a 16th century dutch painter who spent a portion of his life in Rome.  In addition to Jesus we see the two thieves who were crucified with him.  The unnamed one on his left and Dismas on his right.  Do you remember Jesus’ response when Dismas asks Jesus to remember him?  Did you know that Dismas was named a saint?
“Amen, I say to you, today you will be with me in Paradise.”
Luke 23-43 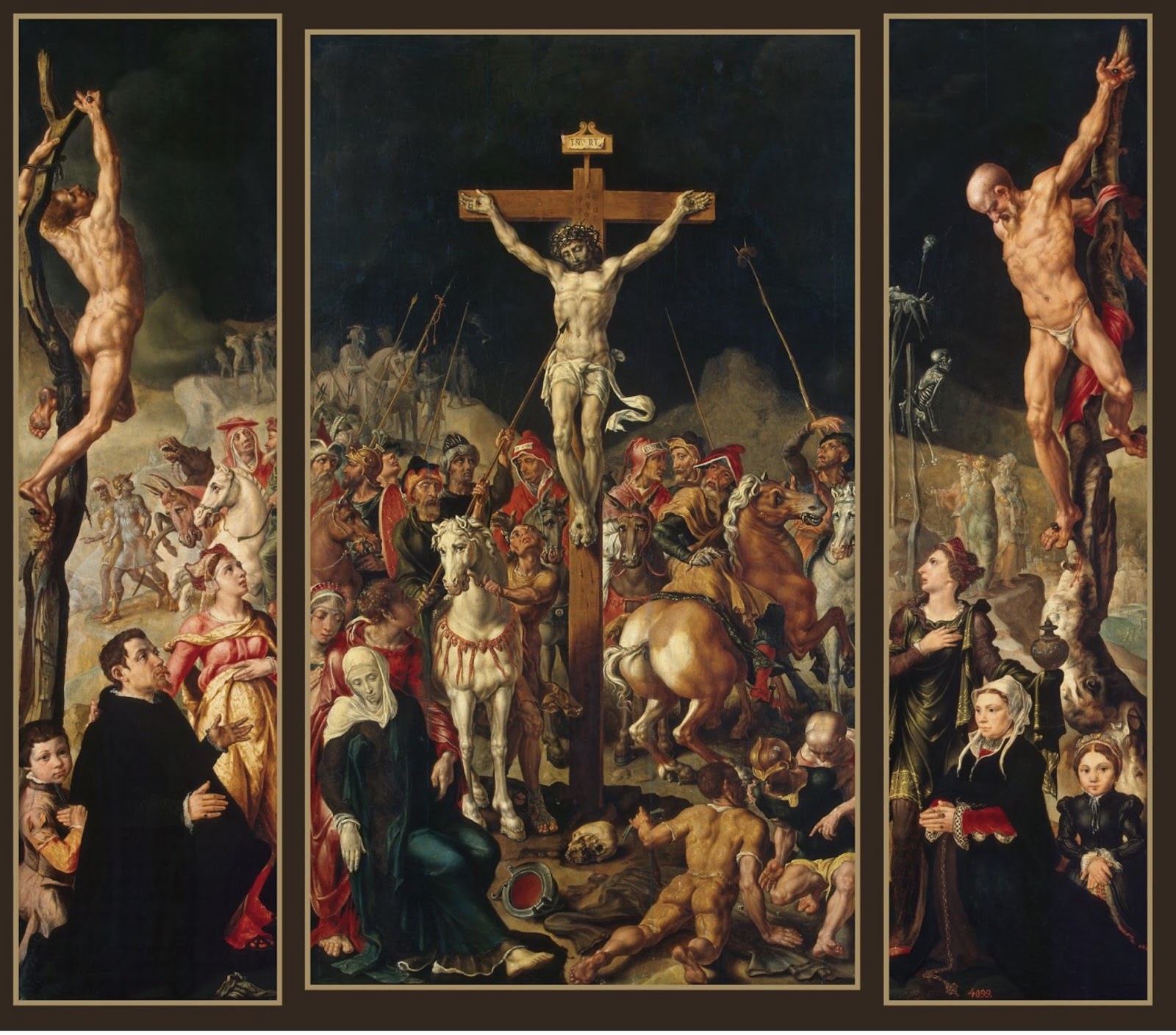 The commentary of Miroslav Volf, a professor of Theology at Yale is a bit dense but worth our consideration.  Here is a paraphrase.
Christ on the cross:
*           identifies God with the victims of violence (and)
*           identifies the victims with God,
so that they (the victims) are put under God's protection
and….. given the rights of which they have been deprived.
Here is my takeaway:
Even the weakest members of the body.
The sinners striving to be saints as well as the saints whose sins have been justified by faith.
All who suffer because of violence. Those who protect the victims - and those who are victimized by the protectors.  They must not stand alone and they do not stand alone.  Because the body of Christ stands with them.
Missing you,
Bruce
The Christian, however, must bear the burden of a brother. He must suffer and endure the brother. It is only when he is a burden that another person is really a brother and not merely an object to be manipulated. The burden of men was so heavy for God Himself that He had to endure the Cross. God verily bore the burden of men in the body of Jesus Christ. But He bore them as a mother carries her child, as a shepherd enfolds the lost lamb that has been found. God took men upon Himself and they weighted Him to the ground, but God remained with them and they with God. In bearing with men God maintained fellowship with them. It was the law of Christ that was fulfilled in the Cross. And Christians must share in this law. — Dietrich Bonhoeffer
at June 11, 2020 No comments:

In the name of the Father, the Son, and Holy Spirit….. 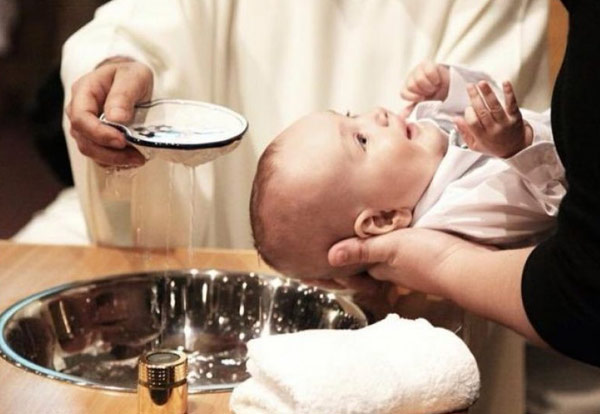 On Sunday nights b.c.* I would religiously tune-in to a radio show and podcast called  “Bullseye”. Its creator and host; Jesse Thorn interviews personalities in arts and culture.   While I like the show, my favorite part comes at the end.  No matter how much of the show I miss, I tune in just to hear Thorn’s clever sign-off:
“And I think that’s about it….
Just remember: all great radio hosts have a signature sign off.”
The recent gospel readings could be considered Jesus’ sign-off.  Some of these come directly from a portion of John’s Gospel sub-titled “The Farewell Discourse”.  Jesus speaks about the relationship between Himself and the Father.  Here is a portion.  The setting is The Last Supper:
Philip said to him, “Master, show us the Father, and that will be enough for us.” Jesus said to him, “Have I been with you for so long a time and you still do not know me, Philip?   Whoever has seen me has seen the Father. How can you say, ‘Show us the Father’?”   John 14:8-10
I see a connection between the content of Jesus’ farewell and today’s Solemnity of The Most Holy Trinity.
We are Baptized in the name of the Father, the Son and the Holy Spirit. We have been taught from childhood to bless ourselves and to do good works in the same three-fold name.
The Trinity plays a prominent role in liturgy.  It is found in the Opening Greeting and Final Blessing.  We affirm it in the Creed.  The Trinity can also be seen in the form of many prayers and reflections.
Unfortunately, trying to understand the Trinity is as futile as asking Jesse Thorn what exactly is his signature sign-off.
Again, from the Jesus’ words at the Last Supper:
In a little while the world will no longer see me, but you will see me, because I live and you will live.  On that day you will realize that I am in my Father and you are in me and I in you.  John 14:19-20
Here are two things we can conclude:
Next week’s Liturgical note will take a look at the implications of these two conclusions.
Missing you,
Bruce
PS
You can find a 12-15 minute recorded Livestream that gives more of the scriptural background for this Liturgical note on Facebook, Youtube or the St. Mary’s Parish Website.  Look for  Ready2Receive for Thursday, June 4th.  If you can’t find it, send me an Email.
* b.c. (before covid)
at June 06, 2020 No comments: